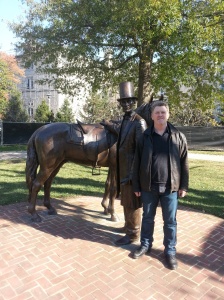 Lincoln traces the last few months of the 16th president’s life, focusing on his effort to pass the 13th Amendment to the Constitution ending slavery once and for all.

Many reviewers have already noted that this is a movie about the US political process rather than the Civil War – so anyone who liked The West Wing, or the political sections of The Wire, will almost certainly enjoy this. But the few brief scenes dealing directly with the fighting – muddy hand to hand combat between black Federal troops and Confederates, Lincoln and his son’s visit to an army hospital, and the aftermath of a battle outside Richmond – give a powerful sense of the horror of the fighting in that war and the weight that it bore on Lincoln’s conscience.

The cast of the movie is outstanding and it is difficult to fault a single performance: Tommy Lee-Jones and James Spader deliver scene stealing turns. Jared Harris and David Strathairn less showy performances but no less well judged. And Sally Field brings a great level of sympathy to the role of the often unfairly maligned, though undoubtedly difficult, Mary Lincoln.

The centrepiece in this movie is, of course, Daniel Day-Lewis’ stunning performance as Lincoln. It is all the more powerful because it is so human: indeed part of Lincoln’s greatness arose from his profound humanity and capacity to relate on that level to some of his most intractable rivals. It is a lovely detail of this movie that one of Lincoln’s favorite approaches to relating to people, his witty anecdotes, are found, at times so infuriating by those closest to him: at one point Stanton, his War Secretary, storms off as Lincoln tries to defuse the tension as they wait for the results of a battle with his favorite story about Revolutionary War general Ethan Allan.

Of course, in spite of Lincoln’s efforts, slavery remains a huge problem in the contemporary world. The International Labour Organization estimates that a minimum of 21 million people are in forced labour in every region of the world today. I hope that movie ‘Lincoln’ inspires this generation of politicians to emulate just a modicum of Lincoln’s political and moral courage when they are doing their jobs, and to take positive steps to end slavery once and for all in our lifetimes.