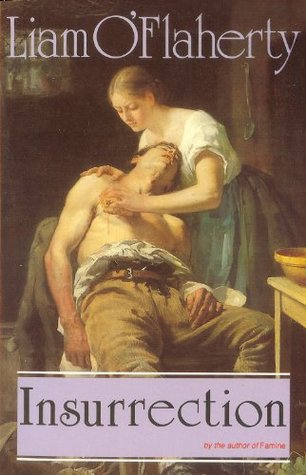 Liam O’Flaherty’s 1950 novel is an account of a small group of rebels progress through Easter Week 1916, starting with the storming of the General Post Office, through an action clearly based on the intense fighting around Mount Street Bridge, to the final hours around the GPO leading up to the surrender.

As in his books Skerrit and The Informer, O’Flaherty’s principle protagonist is a pretty dim one, in this case a Connemara man Bartley Madden, who is transformed, though not intellectually, by his experiences during the novel. How much you enjoy having a Stage Irishman at the centre of the novel you are reading is probably a matter of personal taste, but I could have done without it. Such a device seems to have been chosen by O’Flaherty in order to explore his political and philosophical ideas, and it is these more than the fighting that are central to his concerns in this novel.

And, unfortunately this makes for a rather unbelievable and clumsy novel. Pages are taken up with philosophical and cod-philosophical discourse. Perhaps this is how soldiers, most particularly citizen-soldiers, spend their time in battle. But even if it rings true I found many of their conversations uninteresting and the view of O’Flaherty, who had been a combatant in both the first world war and the struggles around Irish independence, bleak.

Those who know a little about the 1916 rising will recognise that O’Flaherty is generally faithful to the course of events and the geography of Dublin. However if one is searching for a gripping introduction to the 1916 rebellion, Charles Townsend’s historical account is both more informative and, for me, much more exciting.