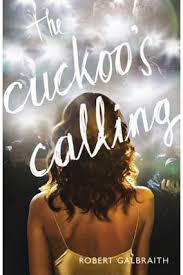 A supermodel, Lula, falls to her death from her balcony in London. The police rule the death as suicide. However the model’s brother is unconvinced. So, he hires a private detective to reinvestigate the case.

Enter JK Rowling’s new serial hero: Cormoran Strike, a gumshoe in the classic mould. Comoran is a war injured ex-military police investigator, haunted by the demons of his youth, his past cases, his war and his shattered love-life. Cormoran, and his side kick Robin – you gotta love an author who calls the side-kick Robin, (though here Robin is a bright young female PA rather than a boy-wonder) – begin an investigation into the tangled web of Lula’s life and death.

The result is a great crime novel, closer to the American hard-boiled tradition rather than the genteel English country house mystery, but with a strong sense of contemporary London.

Despite the shift in genres from children’s literature to crime, JK Rowling displays the traits that made her Harry Potter series such a joy: intricate plotting, great pacing, elegant writing and a lovely sense of humour – Cormoran’s drunken, broken hearted discourses being a particular pleasure: I’ve got to admit I identified with this aspect of the chap’s life more than might be healthy.

All in all it’s a delight from start to finish and I very much look forward to Cormoran’s next outing.