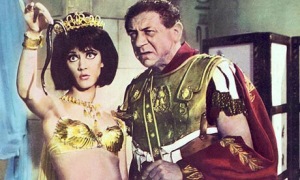 If, before reading Goldsworthy’s magisterial biography, the Caesar of my imagination was essentially Shakespeare’s construct, Antony and Cleopatra for me have always had the faces of Sid James and Amanda Barrie.

However, not that it will surprise anyone, Goldsworthy’s joint biography of the two does rather show that they were not nearly as nice as Carry On would have us believe.

Despite remaining something of a shadowy figure with apparently little of her own direct correspondence remaining, Cleopatra is by far the more impressive of the two. She parlayed, initially, little more than her intelligence and beauty into securing the throne of Egypt for herself by seducing in succession the two most powerful men in the world. Having secured her position she acted with considerable ruthlessness killing her rivals, including her own siblings. Subsequently she poured the resources and treasure of Egypt into the military schemes and political careers of her lovers as a means to secure her own position.

Goldsworthy argues that, in spite of the legends of Cleopatra’s sexual voraciousness, she probably only had two lovers in her life, Caesar and Antony. He presents evidence that there was genuine love from both sides in these relationships in spite of the political calculations that each of the three would also have been considering.

Unfortunately for Cleopatra, Antony was an inferior model of Roman to Caesar. Antony was a talented subordinate but he was a poor general given to heavy drinking, and in later life, particularly following his military reversals in Parthia, depression. His power came to him in considerable part through luck in the turbulent aftermath of Caesar’s assassination. Cleopatra’s grip on power was only as secure as Antony’s and in the end he was no match for Octavian, who, in spite of his apparent lack of physical courage, as he got older began to display a political genius that echoed his uncle’s military variety. 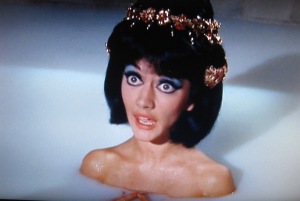 Goldsworthy’s book is a consistently interesting account of the lives of these two, in particular in the chaotic aftermath of Caesar’s assassination and the beginning of Octavian/Augustus’ reign as the first emperor. There is no mention of baths in asses’ milk but, nevertheless, it does entertain albeit in a very different way from Sid and Amanda’s gloriously silly portrayal of the relationship.