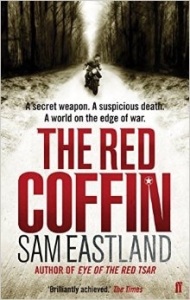 Inspector Pekkala is an honest cop in Stalin’s secret police, the NKVD. So Stalin gives him the job of finding the truth behind the grisly death of the head of the Soviet programme to develop a new tank, the T34, or, as the test drivers have begun to call it, the Red Coffin.

The idea of the honest investigator in a corrupt world is not a new one: Raymond Chandler’s Phillip Marlowe was conceived of as a knight errant updated to his contemporary Los Angeles. More recently Phillip Kerr’s Bernie Gunther, JK Rowling’s Commoran Strike, and Martin Cruz Smith’s great creation Arkady Renko walk similar paths.

What makes Pekkala different is his milieu, that of Stalinist Russia, and Eastland clearly knows this subject well: One comic-dreadful moment is when Stalin sends for an officer he desperately needs only to discover he has already forgotten that he has had the man liquidated.

The resulting book is highly entertaining, but I am not sure wholly convincing. The notion that Stalin would keep a few honest men about is not completely beyond the bounds of credibility: Stalin tolerated Zhukov, for example, because he knew he needed his genius to fight the Nazis.

So the idea underpinning this book is that in the increasing paranoia and terror of Stalin’s purges Pekkala, formerly a special investigator for the Tsar, is kept about for the moments when Stalin needs the truth, not just scapegoats. I am not sure that the relationship between the two would develop to such an extent that anyone would ever feel comfortable about carrying out a practical joke on the psychotic tyrant though.

The resolution of the mystery is also a bit disappointing, arriving in an series of unforced confessions. However a confrontation with a tank on the Polish border at the climax does redeem the book somewhat.

Overall it’s an entertaining book, and the characters of Pekkala and his sidekick Kirov are engaging enough to want to return to the series.