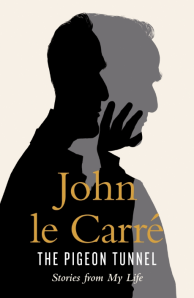 Summary: just what he wants you to know

The Pigeon Tunnel is a memoir presented in the form of short stories and vignettes from the author’s life. Some are extremely funny. Some, such as his brief appreciation of his friendship with the late ITN newsreader Reggie Bosinquat, or his disclosure of how he came upon the character of Issa in A Most Wanted Man, are very moving. Some shine an unexpected light on aspects of world affairs in forlorn and forgotten places over the past 40 years. All are exquisitely written.

I cannot recall enjoying many books as much in recent years. And yet I am not sure I know David Cornwell, John le Carre’s alter ego, any better having just finished this book. Le Carre tells us much about the things he has done and seen, including, towards the end, a beautifully written chapter on his relationships with his parents, in particular his con-man father, Reggie.

But there is always a sense that le Carre is only prepared to disclose so much and is wholly in control of those portions of his biography that he is prepared to be known. He is substantially silent, of course, on much of his work as an MI6 officer. But he is also very silent on his love and family life: siblings and offspring are referred to with much affection but little information; the ending of his first marriage is referred to only obliquely, as is his finding love with his second wife, Jane.

In truth le Carre’s subject in The Pigeon Tunnel, is not David Cornwell, but the books that Cornwell wrote under this nom de plume – their points of origin, the research undertaken to bring them to publication, and, occasionally the adventures involved in transposing them to film.

It’s a lovely and frequently fascinating excursion with one of the finest living writers of English. Treat yourself and read it!