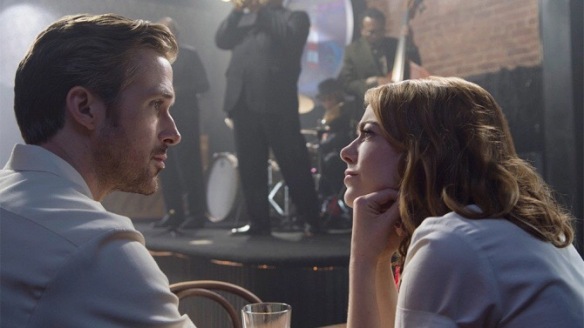 Seb is a struggling musician… and a bit of a jerk. Mia is an aspiring actress who looks exactly like Emma Stone and is just as lovely. After a couple of inauspicious encounters they finally get to know each other and fall in love. Each encourages the other to pursue their dreams. But unfortunately the very pursuit of those dreams threatens to tear them apart.

The story may be slight, but the way La La Land tells it is nothing short of exquisite. It revives the Hollywood musical format in a way not seen in decades – particularly if one overlooks, as one should, the execrable movie version of Chicago. Emma Stone and Ryan Gosling are as lovely a central couple as have ever graced the silver screen. But there is something that seems grounded about their characters, almost ordinary, that makes them easy to relate to.

Like Singing in the Rain, La La Land is a movie about the makers of art. But there is something perhaps more universal to it. As well as the enormous joie de vivre of the film’s comedic exchanges and its glorious song and dance the movie takes seriously Beckett’s admonition: “Ever try? Ever fail? No matter. Try again. Fail again. Fail better.”

I am generally not one for musicals, but I left the cinema wondering if La La Land had just stolen a place in my all time movie top 10. It is a lovely tonic in these bleak times, celebrating art and artists just as the storm clouds gather again on Europe and the United States. Just like the Women’s Marches across the world in the aftermath of Trump’s inauguration, La La Land reminds us of the importance of getting up after getting knocked down. It is perhaps the perfect movie for our times.