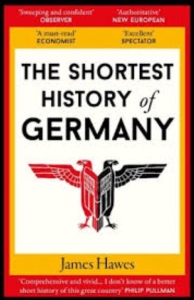 Summary: A spectre is haunting Europe and it is the spectre of Prussia

In this book James Hawes argues there are two Germanys. One is in the West, orientated towards Paris, Brussels and the rest of Western Europe. This part of Germany conforms to the part that was Romanised, and subsequently formed part of Charlemagne’s empire. This part is substantially Catholic and was notably resistant to Nazism in the past and the far Right and far Left in the present.

On the other hand there is Prussia: Protestant and Russian-orientated, it formed in territory that was conquered and colonised, and which, under Bismarck, conquered Western Germany to establish the German Empire. The rump of this state, which the Allies tried to bury beneath modern Poland at the end of the Second World War, still persists in the East.

To this day, Hawes argues, many of the inhabitants of Prussia continue to bear the racist attitudes of colonisers, regarding themselves as somehow “special” compared to the ordinary mass of human beings. Prussia more than any other part of Germany facilitated the rise of militarism and Nazism in the late 19th and 20th Centuries, and provides fertile ground for extremists to this day.

The reunification of Germany in the 1990s brought together again these two quite different countries to restore the borders of Bismarck’s Empire. This reunification, Hawes argues, was not undertaken for any carefully considered reasons regarding how these two German states should best grow and develop. Rather Helmut Kohl saw that Christian Democrat support in the East would guarantee him a further term as Chancellor so he went full steam ahead for that with little thought of anything else.

The consequence has been something of a return to the pre-war arrangements between West and East: Since reunification the West subvents the impoverished East to the tune of trillions of Euros with little sign of obtaining any change in those repellent aspects of Prussian culture that have caused so many problems for Germany and the rest of Europe over the past 200 years.

Hawes notes that “what makes people vulnerable to wild scares and promises isn’t just income but culture.” And it is the culture of the peoples of the old colonial and imperial powers of Europe, such as Prussia, such as Britain, clinging to their notions of superiority and exceptionalism, that prove most susceptible to the promises of political snake-oil salesmen. Recognising this, and confronting such prejudices in Britain, Germany and elsewhere offers a more promising prospect of eroding them than the pusillanimous approach of pandering to them and insisting they must be respected when presented as “the will of the people”.

The Shortest History of Germany is a fine, lucidly written and thought-provoking account of German history covering over 2,000 years from Caesar to the present day. It packs a startling amount into a very short text, and is essential reading for all Europeans