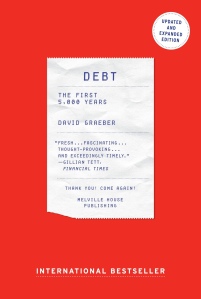 In early medieval Ireland the basic unit of currency was the slave girl. This could be sub-divided into units of milk-cows, and provided the basis of not just commerce but the judiciary: the compensation a family could expect for the killing of a son, for example was set out in terms of slave girls and cattle depending on any extenuating circumstances that might exist. (Such was the negotiation that Queen Mebh undertook with Ferdia in the Irish national epic, The Tain, as she tried to bribe him to kill his foster brother, Cuchullain, with promises of bond-maids, including her own daughter.)

This is one of the many historic and geographic excursions that David Graeber undertakes in this book, an effort to demonstrate the nature of credit, money and debt over the millennia. It is an extraordinarily sprawling and rich account.

Graeber is an anthropologist not an economist. One gets the sense that his real purpose with the book – more than showing the origins of money or the interlinkage and interdependency through history of violence, debt and slavery – is to show the extraordinary complexity of human societies, how these complexities are often manifest in the way debt, money and credit are conceived, and that human beings, and hence human societies are vastly more complex than economists like to imagine.

With regards to that interdependence of war, debt and slavery, medieval Ireland’s use of slaves as a currency unit makes that perhaps more explicit than most societies. Others have sought to disguise the relationship not least through the media of gold and silver. But it is war, Graeber convincingly argues, that gives bullion its allure: it is easier to pay rampaging armies with precious metals than with promises of slave girls that they will take anyway. And it’s easier to transport bullion than livestock.

During their invasion and occupation of the Americas, the conquistadors butchered entire civilisations to get their hands on their precious metal objects and then enslaved the survivors to be worked to death in silver mines. This silver ushered in a new golden age for Spain, and because it was increasing accepted as a medium of exchange in international trade it opened enormous new commerce with Asia. But all of this was facilitated at root by the brutal enslavement of hundreds of thousands of native Americans.

The Trans-Atlantic Slave trade, which enriched much of Northern Europe, also exemplifies the interdependency of war, debt and slavery: African debtors and prisoners of war, were traded for firearms and other goods, to be shipped to the Americas and, once there, traded again for the sugar and tobacco that Europeans craved.

Today debt is the most common mechanism for enslavement of human beings: debt bondage was recognised by the United Nations in 1956 as a “slavery-like” practice. Bizarrely Graeber does not explore this phenomenon much: he’s, perhaps, too caught up in Orlando Patterson’s idea of “slavery as social death” to realise that for millions of people across the world slavery is also “social life”, and loving communities live with this reality decade in, decade out, hemmed in by debt.

This considerable lacuna aside there is an enormous amount to recommend this book. Amongst other things it has illuminating discussions of the origins of money, the role of debt cancellations or “jubilees”, such as that announced by the Rosetta Stone, in economic history, and the development of coinage during the “Axial Age”: a period of parallel flowerings of civilisations on the shores of the Aegean, in the Ganges Valley of India, and the Yellow River kingdoms and city states of China when Pythagoras, Buddha, Lao-Tse, and Confucius were all simultaneously alive. As well as being erudite it is also frequently very funny. It makes a strong case for a much more human understanding of the economy and society, and a radical reformulation of systems of credit and debt away from the cons and Ponzi schemes that currently pass for international finance that benefit only a tiny few while consuming the very Earth.