Summary: myth as a prophesy of war 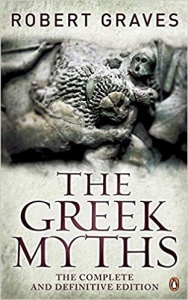 In the Greek Myths, Robert Graves provides a sprawling and comprehensive survey of these stories from creation to the return of Odysseus to Ithaca. The approach is mostly “chronological” though some portions, such as Agamemnon’s return and the vengeance of Orestes, are placed in the narrative before temporally subsequent ones, such as the sack of Troy.

Many of these stories are now perhaps best known from classical literature such as Homer, Virgil, Aeschylus or Sophocles. But here Graves tries to be true to their oral origins, acknowledging that there are a variety of versions of the stories, including differences in some of the reported names of the characters and indeed in some of the stories’ conclusions: Some say that Theseus felt bad about abandoning Ariadne, for example; or some say that Iphigenia was rescued by the goddess Artemis, not trussed up and slaughtered like a goat by her own father.

These stories have been cleaned up over the years, often for children, by the likes of Charles Kingsley or Roger Lancelyn Green. But here the “heroes” are as they were – an array of bloody men, and a few bloody women, from an era when the only balm from trauma was the facade of martial glory.

Hence it is difficult to see the story of Theseus as anything other than the story of an idealistic young man descending into increased horror and cruelty as a result of a career of killing that he enters in the hope of fame and glory. Heracles comes across as little more than a psychopath: extraordinary that someone should decide to make a Disney cartoon out of that one. Odysseus is clever and brave, but also venial, untrustworthy and brutal, breaking his word to those Trojans to whom he promised protection, and personally murdering Hector’s infant son, amongst other vile and treacherous deeds in his career of war and wandering,

Perhaps this volume makes better sense as a work of reference than an a work of narrative. But, taken in total, these stories give a shockingly stark portrayal of the effects of violence and warfare on both the victims and the perpetrators. Perhaps this was part of their appeal to Graves, himself a veteran of the carnage of the First World War.

Neither the Trojan War nor the wars of the Twentieth Century seem to have done much to dispel the attraction to war for a certain class of human. So in telling these stories, as well as his own war experiences elsewhere, Graves may have realised that he was also heir to Cassandra, the princess of Troy, gifted with the power of perfect prophesy and cursed with the knowledge that even her most desperate warnings would never to be heeded no matter how menacing the approaching “smell of blood”.