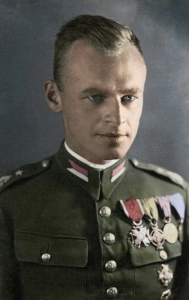 In the vastness of the Second World War, one fact contends for the title of most startling of all, and it is this: Polish officer Witold Pilecki volunteered to be imprisoned in Auschwitz.

It is true that, when he first agreed to the assignment in 1940, he probably could not have conceived of the scale of the risk and abject horror that he would encounter there. After all he took this intelligence mission specifically to find out what was going on in this secretive German facility. But having seen what was happening he still stayed for three years, risking his life every day in a effort to build a resistance movement there and to alert the outside world to what was happening.

A veteran of both the 1920 Poland-Russia war and the 1939 invasion of Poland by Germany Witold was a brave man with no illusions about war. But he had never seen anything like Auschwitz. No one had.

The reports that Witold sent to the resistance in Warsaw and to the Allies in London detailed something unprecedented in human history: the construction of an industrialised programme of mass murder. In the shadow of this Witold’s organisation gathered intelligence and, where they could, assassinated Nazis. But Witold also realised that kindness was resistance in that every time someone shared meagre food or helped a fellow prisoner it was a refusal to accept the dehumanisation that the Nazis intended for them.

Even seeing the Nazi atrocities against Jews, political prisoners and Russian prisoners of war with his own eyes Witold could barely comprehend it so vast and irrational was that killing. But the Allied High Commands who refused to respond to Witold’s pleas for direct action against this genocide have no such excuse. The cumulative evidence provided to them at enormous cost by the Polish Home Army and the Jewish Agency can have left little doubt as to what was happening. But thousands of miles away from the death cries of Jewish women and children and the stink of incinerated human flesh Churchill and Roosevelt found plenty of excuses for inaction.

Witold eventually escaped to make a direct appeal to the Home Army for military support to an uprising in Auschwitz. But by this stage they too were preoccupied with other things, most particularly their plans for an uprising in Warsaw to reassert Polish independence at war’s end. So the courageous resistance network that Witold had built up in Auschwitz was left hanging, eventually to be liquidated by the SS.

Witold died knowing that his mission to Auschwitz had been a failure. Furthermore as someone who was regarded as a traitor by the Stalinist authorities who replaced the Nazis the full details of what he did were also covered up until the fall of the Soviet Union. But, as Witold said before his death,”I tried to live my life in such a fashion so that in my last hour, I would be happy rather than fearful. I find happiness in knowing that the fight was worth it.”

Jack Fairweather’s book is a superb, and superbly gripping, tribute to this man of conscience and action who the butchers of history tried to erase. In spite of his failures Witold’s life stands as an enormous indictment of all those who fail to use the power that they have to diminish human suffering.