I was Director of Anti-Slavery International, the oldest international human rights organisation in the world, from 2006 to 2017. During my time there our achievements have included: holding the state of Niger to account in an international court for failing to protect its citizens from slavery; the introduction of a new statute to British law proscribing forced labour and changing British common law to protect the rights of victims of trafficking; working with the British Government to have a special UN rapporteur on slavery appointed; working with the International Trades Union Confederation to have new international laws established on forced labour, and decent work for domestic workers; and the exposure of slavery in the manufacture of garments for Western high street brands; and the recognition of forced marriage as slavery in the International Labour Organization’s 2017 estimates of global slavery. We also played a leading role in the inclusion of  victim protection and supply chain transparency measures in the UK Modern Slavery Act (2015).

In 2007 I was the first person to raise the imperative of making slavery eradication a post-2015 development goal, and was a lone voice on the issue until Pope Francis took it up in 2013. This led to its inclusion as an important target in the Global Goals.

Before joining Anti-Slavery International, I worked for over 13 years in humanitarian response, development and human rights. This included periods in Ethiopia and Eritrea working on rural water supply and soil conservation, and Afghanistan, in the months before the Taliban takeover, where I worked on emergency water supply in the displaced persons camps outside Jalalabad. I spent five years in Angola at the end of the civil war managing an emergency relief programme for over a quarter of a million people in the besieged cities of the interior as well as working with the UN on human rights protection of civilians from military excesses. That is where my hair first turned grey. 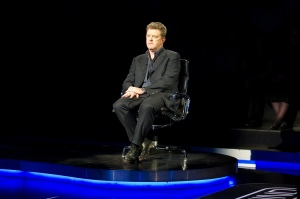 In 2010 I completed my doctorate, a work of moral philosophy and social science, on ethical choice making in professional practice.

Oh – and I won Mastermind in 2013, specialist subjects: Michael Collins, the novels of Dennis Lehane, and Abraham Lincoln.

My first novel, The Undiscovered Country, is forthcoming from Unbound in 2020, and I’m currently working on my second, tentatively entitled Some Service To The State.