A World on Fire is a remarkable achievement. It is a history of the American Civil War taken from the novel perspective of the relationship between Britain and the US during the war. Hence the principal characters are Lord Lyons, the British representative to the US, Charles Francis Adams, the US minister to London, and Seward the US Secretary of State with a host of other political and diplomatic figures in support.

This approach illuminates aspects of the war little touched upon by more conventional US histories, notably the real risk to Union victory posed by recognition of the South by the European powers, and the closeness to war between the US and Britain on a number of occasions. Consequently this book provides a more critical portrayal of Seward than, say, Doris Kearns Goodwin’s masterful biography of Lincoln, Team of Rivals. 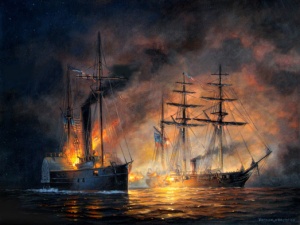 This diplomatic history of the war is told within the framework of a more conventional political and military narrative of the course of the war. Here a perspective on the fighting is offered by, principally, the letters and memoirs of the British and Irish volunteers who fought for both North and South.

At times it is difficult to keep up with the astonishing cast of characters that Foreman has assembled, but it is well worth the effort for the startlingly fresh perspective that this book puts on the American Civil War.