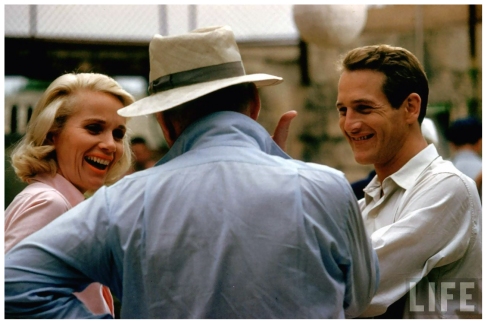 There is a story that one Jewish critic stumbled out of the premier of this movie and pointing to the audience demanded of Preminger, the director, “Let my people go!”

Having watched Exodus its easy to understand his reaction to being stuck in a cinema with little option but to endure watching this to the end. This is a film that takes its worthiness seriously and the result is a desperately boring affair. This is not helped by what seems to have been an artistic decision to keep almost all the action off screen. This helps from a propaganda perspective of not depicting the civilian carnage, as well as British military deaths, wrought by the Israeli Irgun bombing of the King David Hotel. But it doesn’t add to the entertainment value of the film. Only the prison break sequence does much to get the pulse racing.

The disputes on methods between Hagannah and Irgun are touched upon, but then skated over: the Irgun are portrayed as serene and thoroughly humane despite their adherence to terrorism. Strangely though the character based on Menachem Begin is shown as wholly untroubled by the King David bombing, which he ordered, while accounts suggest that Begin was in fact deeply affected by the unintended civilian casulties. Though this does not appear to have dimmed his ruthlessness in the course of his subsequent career it does indicate a deeper human conflict that would have been artistically interesting to explore.

Politically the film makes some interesting points, expressing hope for a sharing of the land amongst Jews and Arabs, though the reasons why this hasn’t happened are barely touched upon.

The acting in the film is a mixed bag: Paul Newman, Eva Marie Saint and Lee J Cobb are of course consummate professionals. Sal Mineo and Jill Haworth as young refugees and lovers are pretty woeful, not helped by the fact that their characters are stereotypes. The cinematography is exquisite. The score is justifiably legendary and promises something much more than the director managed to deliver. In fact it is the score rather than the director that gives the film any emotion it has.