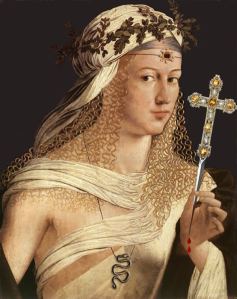 This is a startlingly dull biography of one of history’s most infamous families, its limitations perhaps a product of the fact that Christopher Hibbert was working on this towards the end of his life.

There is a welcome focus in the book on the unfairly maligned Lucrezia, and the author illustrates how she was a pawn in the power-plays of her pope father, Rodrigo, and brother, Cesare. The book details her many horrific experiences, including the murder of her husband, probably by her brother Cesare, and effectively refutes the myth of her monstrousness

Cesare was no more dastardly than his contemporaries, and in many ways more effective, as Machevelli’s account indicates. But he was still a pretty nasty character. He was a murderer and a rapist, keeping, for example, Caterina Sforza-Riario, ruler of Imola and Forli, as a sexual slave for weeks after sacking her cities. Tiring of her after a while he consigned her to the dungeons. Hibbert treats the coarse humoured contemporary accounts of the “willingness” of Caterina at face value, rather than consider in any great depth the invidious nature of Caterina’s position, and what this says about Cesare.

Time and again Hibbert seems more interested the clothes that the Borgias wore rather than the psychology of the family and the politics, papal and secular, that drove them. On the positive side it is a short book and does provide a relatively concise overview of the careers of this family. Still considering the potential of the source material it is a disappointing book, and probably unrepresentative of the author.