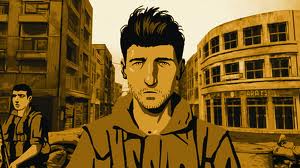 Ari Folman in Beirut, from Waltz with Bashir

Twenty years after the Israeli invasion of Lebanon, of which he was a participant, the writer and director Ari Folman realized that he had little memory of his time there. This included being stationed a few hundred metres from the Palestinian refugee camps of Sabra and Shatila during the three days in which the Phalangist militia massacred the population there.

Waltz with Bashir recounts how, with the help of others who had been there, including fellow soldiers, he began to recover his memory of the events. The result is this extraordinary “animated documentary”,

Palestinians and Lebanese have no voice in this film. Nevertheless it still represents some of the best impulses in Israeli society, documenting how an ordinary Israeli faces the truth of a particularly vile episode in his nation’s history in which he himself was directly implicated.

The massacre in Sabra and Shatila has echoes through history: one Israeli journalist, Ron Ben-Yishai a distinguished war correspondent who was the first journalist to witness and report on the massacre, and personally informed the then Israeli defense minister Ariel Sharon of the massacre as it was occurring in a bid to get it stopped, recounts how the scene in the camps reminded him of the images of the Warsaw Ghetto.

There are other echoes in Middle Eastern history. One not mentioned in the film is how in 1268, on capturing the city of Antioch, the Sultan Baybars immediately locked the city gates to stop the escape of any of the town’s inhabitants as he proceeded to massacre them. Folman argues with this film that the role of the Israeli army during the massacre was the equivalent to Baybars’ locking of the gates. This allowed Israel’s Phalangist allies, Israeli-equipped and in the full knowledge of the highest Israeli military commanders, security to carry out the slaughter, safe in the knowledge that the civilians they were killing could not escape through Israeli lines. While the film may provide only a narrow perspective on the Lebanese invasion, it is a startlingly brave and humane one, showing how an ordinary individual human can take responsibility for himself and the best ideals of his country even in the face of racist atrocity and overwhelming historical events.