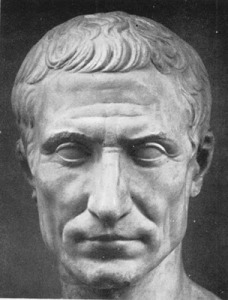 Summary: an extraordinarily gripping account of one of history’s most dramatic lives

I started reading this book because I felt I should: I realised I didn’t have a fully formed opinion of Julius Caesar, other than Shakespeare’s negative portrayal of him. I felt that this was something of a character flaw for an erudite chap of the 21st Century.

So I started reading and was quickly hooked. Certainly, as Goldsworthy points out, Caesar had a more dramatic life than almost any other human being who ever lived, from his conquest of Gaul, to his crossing of the Rubicon, to the delivery of Cleopatra to his bedchamber in a laundry basket, to his assassination in the Senate. But there was more than that: I was surprised by just how much I came to like Caesar.

One anecdote early on I found peculiarly endearing: At the height of the Catiline conspiracy crisis Cicero addressed the Senate demanding the death penalty for the conspirators. Caesar followed this by arguing for their banishment instead. Cato, a bitter opponent of Caesar, took this as indicating that Caesar was secretly in league with the conspirators and stood to denounce him in colourful terms. While this was going on a slave arrived in the Senate to deliver a message to Caesar. He read it quietly and then tucked it into his toga. Cato seeing this declared that there was proof of his collusion: see Caesar has just received a communication from the conspirators. Caesar calmly took the letter from his toga and handed it to Cato to read, whereupon Cato discovered that the suspicious letter was in fact a very passionate love letter from Caesar’s mistress, Servilia, Cato’s own sister. Enraged Cato threw the letter back at him.

I like to imagine Caesar having a chuckle at being the architect of such devilment.

Caesar was certainly, as well as being a military genius and a fine writer, a ruthless and self-interested man. But, by Goldsworthy’s account he was a considerably less gratuitously violent than most of his contemporaries, tending to use terrorism for clear political purposes rather than for its own sake or the sadistic enjoyment of it. While he made a vast fortune from the trafficking into slavery of thousands of Gallic prisoners of war, his conduct regarding the treatment of prisoners during the subsequent civil war was admirably humane by the standards of his contemporaries and indeed in comparison to many subsequent military leaders down to the present day. It is chilling to think though that his humaneness to the pirates who once held him for ransom, and who he befriended during his captivity, merely meant that he ordered their throats to be cut before their crucifixion.

The book is a exquisitely written account of his career, so gripping that it made me on several occasions miss my tube stop as I was reading it on the underground.

6 thoughts on “Caesar by Adrian Goldsworthy”