Common sense does not always prevail. Situations and circumstances can take on their own momentum leading to disastrous outcomes.

Take the case of the First World War. Nobody in the chancelleries of the Great Powers wanted or foresaw war when news of Gavrilo Princip’s bloody action in Sarajevo was first heard. Very quickly however imperial bellicosity, diplomatic ineptitude,  and the demands that railway timetables imposed on the movement of German troops led to a conflagration that engulfed all of Europe.

For those who think such things couldn’t happen again it is worth looking at Bob Woodward’s exploration of the decision-making leading up to George W Bush’s invasion of Iraq. This describes how an initial request for a contingency plan quickly ballooned, as part of the planning process, into troops and armour in the desert and with that a overwhelming pressure for invasion and war. The consequences of the resultant chaos is with us still.

“Events, dear boy, events” still, as they have always, drive decision makers to places they do not necessarily want to go. And, as certain as that, is that whenever there is a Big Red Button that should never be pushed there is always a Father Dougal there to push it no matter how catastrophic the consequences. 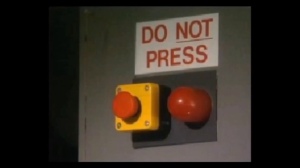 I suspect that is where we are with Brexit now. Every – EVERY – credible report and study shows it will be a disaster. Logic alone suggests that cutting your country from its closest allies at the behest of Donald Trump and Vladimir Putin is a poor idea. The consequence may be a relatively small disaster, as in the case of Theresa May’s vile, xenophobic deal. Or it may be a disaster comparable to a small war, as in the case of a “no-deal” Brexit. But whatever shape Brexit ultimately takes there will be one commonality – it will be a disaster.

There are assurances from parliamentarians that parliament will not countenance a “no-deal” situation. But to avoid such an outcome requires rational thought and moral courage. That is in spectacularly limited supply amongst the current membership of the House of Commons. From the sinister, such as Jacob Rees-Mogg and Kate Hoey, to the cravenly self-serving, such as Boris Johnson and Theresa May, to the simply stupid, such as David Davis, Andrea Leadsom, Priti Patel, Steve Baker, Nadine Dories, to the Lexit fantasists like Jeremy Corbyn, there is a such a plethora of clowns and charlatans lining up to press that Big Red Button, that it is a brave person who will bet that sanity will triumph.

That so much of the media is still treating this gallery of eejits and gobshites as credible and serious-minded leaders foretells a future reckoning for the Fourth Estate. Truly this has not been their finest hour.

In the course of its long and blood-stained history England, aside from a few brief episodes, has managed to avoid the deprivations it has inflicted on so much of the rest of the world. This has led to a considerable sense of exceptionalism that still pertains: “What has happened to others cannot happen to us.” Why? “Because we’re English, that’s why.”

But the English are as human as the rest of us and cursed with the same flaws and fears that have driven disasters in so many other parts of the world. Having placed their trust in the array of shysters that now infests the Palace of Westminster, it may simply now be their turn, and Brexit their reckoning.

However it may be some small consolation for those who will suffer Brexit’s bitterest consequences that those who have led them to this juncture will not share in their suffering. Rees-Mogg, Johnson, Davis et al will remain ensconced in wealth and privilege no matter how deep the economic downturn, and those who can least afford to pay will bear the brunt. In the century since the lions were first led by the donkeys to the slaughter of the First World War the donkeys will finally be unequivocally in charge again. And God help us all when that happens.