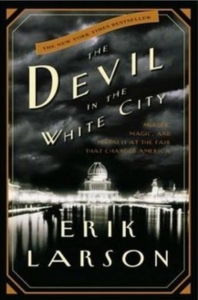 Summary: the gripping interwoven tales of an architect and a murderer in 1890s Chicago

The largely now forgotten World Fair in Chicago in 1892 changed the world. Amongst other things it gave us the first large scale testing of electric lighting from alternating current, a vision of how beautiful cities could be instead of the squalid, dirty things they often were, and the Ferris wheel.

Devil in the White City is a compelling account of how the Head of Works for the Fair, Frank Burnham, a Chicago architect, marshalled the resources of the city to overcome an overwhelming set of organisational, technical and bureaucratic obstacles to deliver this world changing event.

If the book were only about Burnham and the World Fair it would be a compelling, though perhaps niche interest, work. Everyone who was anyone, except Mark Twain, seems to have been involved somehow with the Fair: President Grover Cleveland opened it. Buffalo Bill Cody put on a show there attended by Susan B Anthony; Theodore Dreiser escorted a party of schoolteachers who had won their trip from his newspaper. And amidst the crush of new visitors to Chicago, a doctor and pharmacist by the name of Herman Webster Mudgett, murdered and robbed dozens of innocent men, women and children, unbeknownst to the Chicago Police Department.

Devil in the White City is a combination of social and architectural history interwoven with a tragic and horrific story of a murderer and his desperately sad, trusting victims.  It is an extraordinary work quite unlike anything else I have ever read.

4 thoughts on “Devil in the White City, by Erik Larson”