“The rebels who went out to do battle on Easter Monday morning may have been marching into the unknown, but they shared one expectation: that the British military response would be rapid and hard.” 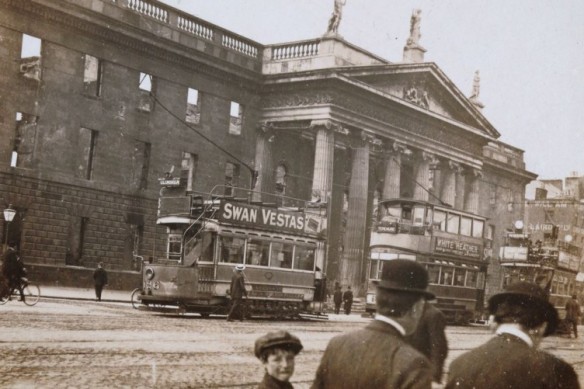 On Easter Monday, 24th April, 1916, a group of armed Irish rebels occupied the General Post Office (GPO) and other major buildings across the city of Dublin. It was the beginning of the Irish War of Independence that would last with varying degrees of political and military intensity until 1921. 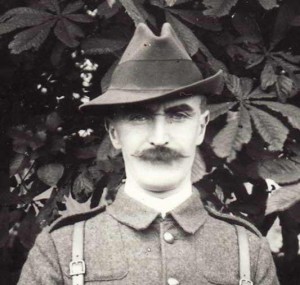 The troops who occupied these strongpoints were members of the Irish Volunteers, a force assembled to defend the Home Rule promised Ireland by the British Government, and the Irish Citizen Army, a force organised by the trade union movement to protect workers from the police. But it was neither an Irish Volunteer nor Citizen Army rebellion so much as an Irish Republican Brotherhood one. The IRB was a highly secretive revolutionary organisation, and with the rebellion they were in fact trying to organise a coup on the leadership of the Volunteers including Eoin MacNeill, the Chief of Staff, and Michael “The” O’Rahilly, Director of Arms.

When MacNeill learned of the IRB plan, to use proposed training exercises on Easter Sunday 1916 to stage a rebellion, he countermanded the order. Consequently instead of tens of thousands rising up all over Ireland, less that two thousand mobilized in Dublin alone.

The remote chances of success were further dented by a considerable quantity of bad luck. The great Irish anti-slavery activist and revolutionary Roger Casement was captured with the huge quantity of German arms he was trying to smuggle into Ireland for the rebellion.

Added to this, from the start there were gaping flaws in the plan. The strong points taken by the rebels were disconnected and hence unable to provide mutual support. They failed to take Dublin Castle, which was virtually undefended because of the Easter holidays. They could have made better use of guerrilla tactics. Where they did, at Mount Street Bridge, a handful of intensely brave Irish soldiers inflicted tragic and devastating losses on the young Sherwood Foresters they fought there. 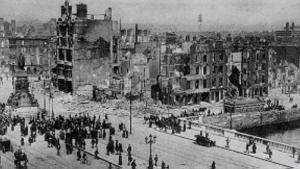 After six days it was over, crushed by the might of the British Empire that overwhelmed them with troops and heavy guns. The O’Rahilly, despite his opposition to the rebellion, ultimately felt duty bound to participate, and was killed towards the end leading an attack on a British machine gun position to give cover to the withdrawal from the GPO. As The O’Rahilly himself had put it in a phrase later taken up by Yeats, the man who had helped wind the clock came to hear it strike.

Charles Townshend, a distinguished English historian of Ireland, published this exceptionally fine account of the origins, course and consequences of the 1916 Easter rebellion in 2005. It is, therefore, the product of a life of scholarship rather than a rush for centenary sales. It is both an accessible starting point for those who wish to learn more as well as a valuable contribution to the ongoing conversations about and considerations of the Rising.

It has been argued that the 1916 Rebellion could never be classified as a just war, given the hopelessness of the cause and that the use of violence could not have been viewed as a last resort. The Easter Rising also casts something of a shadow between unionist and nationalist communities to this day: unionists regard it as a stab in the back of those who were serving and dying in the British Army in the defence of “small nations”.

By the standards of the First World War this was a trifling affair. In the blood bath of the Somme that would begin a few weeks later thousands of Irishmen, nationalist and unionist alike, were pointlessly butchered alongside English, Scots, and Welsh, in the name of Empire.

But one cannot deny the extraordinary courage and idealism of those who went out to fight: Grace and Malone at Mount Street Bridge; The O’Rahilly in the retreat from the GPO; Ned Daly in the Four Courts. These were people who displayed enormous grace under pressure in the face of overwhelming odds, in the name of a just cause, if, perhaps, not in a just war.

Yeats was perhaps never more prescient, both politically and historically, than when he finally published his view of the Rising: “A terrible beauty is born”.

The first thing we must recognise is that slavery is a profoundly political issue: it is about power and exclusion from power. Consequently anti-slavery work must, by its very nature, be contentious.

Slavery is sometimes a result of the cataclysm of war. We see that in the tragic histories of Sudan, Syria and Nigeria. But slavery also exists because of the way we have chosen to establish national and international laws, policies and customs relating to development, employment, trade and business. It is in the opportunities provided by these systems that slavery flourishes.

For example child labour and child slavery, including early marriage, are a global affliction because we have failed as a human society to establish a decent system of education. There are too few schools, and where there are schools, amongst other failings, the curriculum is often poor, ignoring girls needs, and with no provision for decent vocational and entrepreneurial education.

Alternatively in South Asia there is such limited rule of law that factory owners can with impunity enslave girls and young women to produce the very garments that many of us are wearing this morning.

The Qatar 2022 World Cup is being prepared by forced labour. Across the entire Arabian peninsula domestic workers are routinely enslaved. At the root of these systems of slavery is the Kafala system. This provides a legal prohibition on workers escaping even the most abusive of employment relationships.

It is a cynical system to legally facilitate medieval levels of exploitation and enslavement. 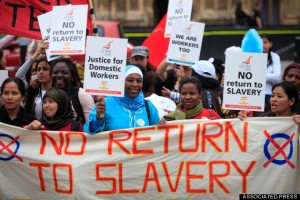 It is also essentially the same system that the UK government has in place for overseas domestic workers. The reforms that that government is currently proposing are cosmetic. They will do little to alter this de facto legalisation of trafficking for domestic servitude of many who are mothers sacrificing their lives and freedom in the hope of a better life for their children.

Jesus said, “I bring not peace but the sword”, because no system of injustice has ever been ended without conflict, and perhaps the greatest sin in the face of injustice is silence. Thus will it be with slavery. It will entail confrontation with those who selfishly guard the rules and resources that underpin it.

Towards this end we must renew the struggle to obtain decent education for all, particularly girls, particularly Dalits and Adavasi, and the children of refugees and migrants.

We must loudly and publicly repudiate the sin of caste based apartheid which scars not only Hinduism, but also Islam and Christianity and underpins slavery in South Asia.

Business must stand with civil society to repudiate law and policy that eliminates the most basic protections for vulnerable workers and increases their risks of enslavement.

President Obama’s recent move to empower public officials to exclude slavery tainted goods from the US market is a significant one. It represents an extension of the rule of human rights law into the realm of international trade. As a result it threatens consequences to those that have tolerated, or worse, facilitated, slavery as a foundational element in their economic policies.

Europe should follow suit and put in place similar powers. Again this is something which ethical business leaders should demand if they truly want to prove themselves against slavery.

It is important for government, business and civil society to work together against slavery. But, paradoxically, if that work is not painful and thankless it will probably be worthless. We must seek empowerment for those enslaved, not mere superficial changes to unjust systems. But, if we have the courage to grasp that challenge, we may also transform a moment of history for vulnerable people across the world.