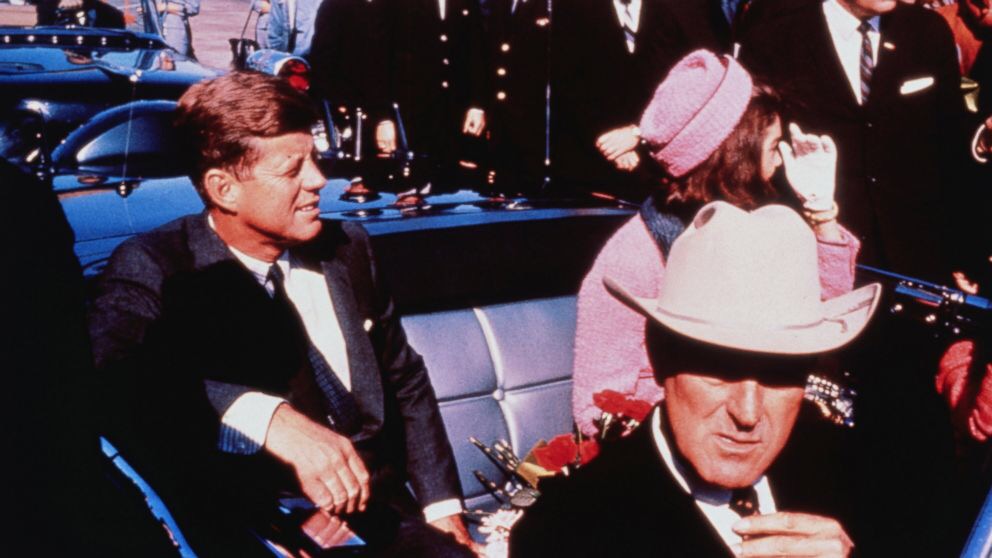 For many Gerald Posner’s book, Case Closed, is the definitive word on Jack Kennedy’s assassination. Posner concludes that Lee Harvey Oswald acting alone shot Kennedy on 22 Nov 1963 in Dallas Texas. It is a widely shared conclusion. Vincent Bugliosi, a distinguished prosecutor who put Charles Manson in jail, concluded the same in his own consideration of the case. And this is of course the official verdict of the Warren Commission established by Lyndon Johnson to investigate the assassination.

And yet as the US gets ready to publish another trove of documents relating to the Kennedy assassination, a clear majority of Americans – in 2013 the Economist reported 61% – still believe that Jack Kennedy was killed in a multi-person ambush organised by high officials in the US government.

David Talbot’s 2007 book Brothers, goes some way to explaining why so many still think this way. Talbot recounts how two of Kennedy’s closest advisers, Dave Power and Kenny O’Donnell, both veterans of World War 2, both travelling in the same car behind Kennedy when they saw him killed, were both under the clear impression that their convoy was under fire from multiple directions, including the infamous Grassy Knoll ahead of them, as well as the Book Depository behind them where Oswald was located.

Furthermore the subsequent killing on live television of Oswald by Jack Ruby, a mob-connected Dallas night-club owner, reeks of cover-up: Ruby’s story, that he wanted to protect Jackie Kennedy from the trauma of a protracted trial, is as fantastical as any Brexit bus slogan.

Talbot alleges that a pivotal figure behind the assassination of Jack Kennedy was Howard Hunt, someone who became infamous in the Seventies for his part in the break-in to the Democratic National Headquarters in the Watergate Building in Washington and the subsequent Nixon administration cover-up.

Talbot notes that in a memoir, American Spy, that Hunt wrote shortly before his death in 2007, Hunt included a “speculative” section on how the CIA would have gone about the killing IF it had been involved. In connection with the publication of that book Rolling Stone interviewed Hunt’s son who claims that, when he thought he was dying, Hunt described to him in some explicit detail the architecture of the conspiracy, which allegedly involved both Lyndon Johnson and senior CIA officials.

Talbot also claims that in spite of public statements that he believed Oswald was the lone assassin, Bobby Kennedy had been privately investigating Jack’s killing for years. Indeed, Talbot believes that, with the help of an FBI investigator, Bobby Kennedy had actually cracked the case, and it was his intention to have it officially reopened if elected president. That dream, of course, came to a bloody end in the Ambassador Hotel, Los Angeles, California in June 1968 when Bobby was himself assassinated.

Robert Vaughn, the scholar and actor, was with Bobby that night, and Vaughn has noted that there were more bullets fired than Sirhan Sirhan, the convicted killer, had in his gun. So, he concludes, there must also have been a conspiracy to kill Bobby. Perhaps this was a further measure to ensure that the truth of Jack’s death never emerged?

Perhaps it is far-fetched to believe in a conspiracy behind the killings of Jack and Bobby Kennedy. And it is improbable that whatever the contents of the papers to be released this week that they will shed much new or definitive light on those awful days. But at a moment in history when it increasingly appears that the occupant of the White House is there as a consequence of a Russian backed coup, and when a cynical campaign of lies has been used to strike at the foundations of a strong and united Europe, then perhaps the Kennedy assassinations still have important lessons for us. Not least they show that, whatever the official versions of events, that power and the powerful must be constantly questioned by the citizenry because it is only upon a foundation of doubt and skepticism that democracy, human rights and the rule of law can safely rest.

Summary: An entertaining biography of the great Kurdish leader who, in the midst of war, introduced chivalry to the West

When a European army took Jerusalem in 1099 at the climax of the First Crusade, the slaughter of Muslim combatants and of Muslim and Jewish non-combatants, women, children and men, was so great that it was said the conquerors’ horses waded up to their bridles in blood. A century later when Saladin retook the city for Islam there was no such carnage. Instead Saladin allowed most of the city’s Christian population to depart in peace after paying a ransom.

Of course, as a man of his times, Saladin was not always so merciful. After inflicting a crushing defeat on Crusader forces at the battle of Hattin, Saladin had the Hospitaller and Templar survivors executed by inexperienced swordsmen whose clumsy hacking to death of the prisoners provided much sanguinary amusement for his more experienced troops.

John Man’s fast-paced, entertaining and informative biography of the great Muslim leader recounts the life and times of this legendary Kurd from relatively humble origins to enormous military and political power in spite of the the efforts of an obscure Islamic sect, the Assassins, to kill him. Over time Saladin managed to unite much of the hitherto squabbling Sunni Islamic world, welding them into a sufficient force to be able to confront the disparate Crusader states.

The peak of Saladin’s career, the battle of Hattin, opened the way to Jerusalem for him, but did not deliver him the prize. One of the few Crusader survivors of the battle was the knight Balian of Ibelin, who afterwards sought refuge in the city of Tyre while Saladin began his moves towards Jerusalem. This is where Balian’s wife resided.

Man recounts the story of how Balian sought a parole from Saladin to go and retrieve his wife, which Saladin granted. On entering Jerusalem the citizens begged Balian to remain and lead the defence of the city. Given their desperate state – most of Jerusalem’s garrison had been killed at Hattin – Balian sent a message to Saladin asking to be released from his parole, a request which Saladin again granted.

This story is one of many – alongside, for example, the one of how Saladin, in the midst of battle, sent two horses to King Richard to replace the one that had been just killed beneath him – that are frequently presented to demonstrate Saladin’s enormous chivalry. However it has always struck me as evidence of something perhaps more intriguing.

Man notes how Crusader and Muslim populations lived so close to each other that trade and even friendship often grew up. This story seems to suggest to me that what actually happened may have been less to do with abstract chivalry and more to do with a politically astute commitment to mercy. Perhaps what was really going on was an arrangement between Saladin and his friend Balian to mount a defence of Jerusalem that, after a decent show, could lead to a negotiated surrender of the city to the Muslim forces without the necessity of storm and the inevitable massacre that would result.

Whatever the underlying truth this is what ultimately happened. And the contrast between the atrocities of the Crusaders and the vastly more moderate approach of Saladin has helped to rightfully make the Muslim leader such an enduring legend in the hundreds of years since his death.

Summary: An impressive attempt to cut through Adam’s lies, obfuscations  and pseudo-intellectualism to understand more properly his role in war and peace-making

In her book, Every Secret Thing, Gillian Slovo’s magisterial memoir of her parents, Ruth First and Joe Slovo, she reflects on the nature of clandestine life, how deceit becomes an all pervasive thing, a way of existence and a habit of living rather than something that can be easily compartmentalised.

This phenomenon may go some way towards explaining the inscrutability of Gerry Adams, a man who has lived much of his life clandestinely: while he has always denied even membership of the organisation most observers of the North of Ireland, myself included, believe him to have been a long-time leader in the IRA, including a period up to the atrocious La Mon bombing as Chief of Staff.

Malachi O’Doherty makes a serious effort with this book to understand what makes Gerry Adams tick. While he follows a straightforward biographical narrative the book is also something of a philosophical and psychological reflection upon the man and his choices to make war and to make peace.

Throughout his entire career there seems to be one constant with Adams: his belief in the IRA as a moral absolute. Any individual who had committed themselves to this is therefore entitled to unquestioning respect irrespective of what they have done, whether it is murdering a young woman teacher like Mary Travers, or a single mother like Jean McConville, or burning civilians alive, such as at the La Mon Hotel. Anyone who criticises the perpetrators and their actions renders themselves politically suspect and morally indefensible in Adams’ eyes. It is as if Pope Urban’s promise of forgiveness of all sins for those who went on Crusade in the Eleventh Century has been purloined wholesale by Adams in his perspective on those who waged his armed struggle.

Other leaders and generals, Adams’ own description of himself, have similar perspectives on their troops. Theresa May’s stated intent to remove the British military from the scrutiny of the European Convention of Human Rights suggests a similar attitude to another group of professional killers.  Perhaps they share the understanding that, as Sherman pointed out, “war is cruelty”. So, having asked men and women to wage it, it is perhaps hypocritical to demand limits on their cruelty once it has been unleashed in what one regards as noble purpose.

I don’t agree that war should ever be unconstrained and believe that those who make war criminals of themselves should be held accountable. But this book does remind us how many of those who were caricatured as evil villains during the Troubles were enormously courageous and self-sacrificing. But courage is not the highest of human virtues – I would say compassion is. And a further thing that this book reminds us is that the dark side of courage is how it can facilitate atrocity.

I was never an admirer of Adams during the Troubles. I found his thinking at best shallow and at worst cock-eyed. I found his justifications for war glib. Adams never seems to have recognised that having claimed for his army a quasi-divine right to wage war that this may give rise to a culture in which individual members regarded their personal right to use violence as a logical continuation of that mystical claim. Nor yet does he seem to have recognised that such a culture might have some relationship to the “unauthorised” operations – murdering civilians and covering up those murders – and the sexual violence that some members indulged in, and in which the leadership seems to have acquiesced. 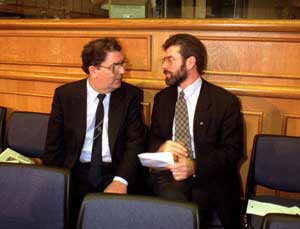 I know that Adams has the reputation of being an intellectual amongst the IRA. But true intellectualism resides in rigorous engagement and testing of your ideas with alternative concepts and perspectives. Adams never had this until he began to sit down with John Hume in a protracted dialogue that gave rise to the peace process.

O’Doherty shows that Adams was indispensable in making the peace. So in spite of all his sins and flaws he does indeed deserve the gratitude of the peoples of Ireland and Britain. Certainly when history judges him, it should be more favourable to him than to those self serving clowns in the British Establishment who, at time of publication of this gripping and elegantly written book, have put the peace at risk with their thoughtless blundering.