Summary: The Shamus’s Shamus shows how it’s done, but rarely explains why.

Terry Lennox was the politest drunk Marlowe ever met. Not the worst sort of guy to share a gimlet with on a Los Angeles evening. So when he shows up at Marlowe’s place one morning with a Mauser 7.65 automatic in his hand and a worried look on his face, what sort of a heel would Marlowe be if he didn’t give his pal a lift to Tijuana, just like he asked?

Then Terry’s wife shows up dead and Marlowe finds himself in a jam of his own when the cops show up at his door curious to know why he seems to be the last person Terry was in touch with.

Raymond Chandler thought of The Long Goodbye as his finest novel, though critics, I read, have been more divided on it. I loved it, though, like his other books, this one is rather tainted by the casual racism of its day. Marlowe is, as always, a tarnished knight errant, more moral than Sam Spade, less enlightened than Spencer, and very much a man of his times, a subject upon which he waxes lyrical.

There is a legend that Howard Hawkes and William Faulkner, director and screenwriter respectively of the classic screen version of another of Chandler’s novels, The Big Sleep, finished the picture with no real knowledge of who was killed or why.

This is of course nonsense. But, like the movie The Big Sleep, chunks of Chandler’s books can race by leaving the reader in some sense of bewilderment as Marlowe’s acerbic comments and laconic attitude rarely lets the reader completely into his thought processes.

But, perhaps because of this, it is intoxicating to be taken along for the ride. Los Angeles’ mean streets never had a better guide.

Summary: a fine, at times horrific, survey of the aftermath of the First World War in Central and Eastern Europe, vital for all Europeans with an interest in the future of our continent

The First World War did not end in 1918. It merely transmuted into a bloody set of interlocking independence struggles and civil wars that racked Europe from Ireland to Russia until 1923.

In this violence lay the seeds of the war that engulfed Europe in 1939. Indeed, as Robert Gerwarth notes in this fine, if necessarily at times horrific, survey of this period in central and Eastern Europe, many of the individuals who brought Europe to its nadir in the 1940s began their murderous careers in the bloody struggles of these years.

In this context Ireland’s bloody independence struggle appears almost civilised in comparison with some of the savagery that the rest of the continent experienced. The atrocities in single weeks in, for example, Turkey, Russia or Ukraine regularly dwarfed the worst that Ireland saw in any given year of its revolutionary period.

The seeds of wider cataclysm in the 1940s were fertilised by the harsh peace terms imposed on the defeated Central Powers in the Versailles Settlement. These treated the democratic revolutionaries of Germany and Austria who helped to bring an end to the fighting on the Western front as if they were the Prussian and Hapsburg militarists who had initiated the bloodshed in 1914.

Given their inauspicious beginnings, it is small wonder then that so many of the liberal democracies established in the ruins of empire at the beginnings of the 1920s collapsed into authoritarianism even before the rise of Nazism that plunged Europe into renewed fratricide. Indeed, as Joe Lee pointed out a few decades ago in his extraordinary book, Ireland 1912-85, Politics and Society, it is not an inconsiderable achievement that, for all its flaws, Ireland did not follow a similar path.

As so many in England now aim to rip up the systems of cooperation that are the foundations of peace in Europe, it is worth remembering the savagery that ordinary people can descend to in times of civil war – and all these European wars were civil wars. Of course if so many in England had a knowledge of war and history greater than that gleaned from watching The Dambusters, perhaps we would not be at this dark juncture.

In March 2007 the singer Rhianna released the song Umbrella. This led many to believe, as the TV presenter Rick Edwards (I think) put it, that she was a voodoo devil woman whose song was directly responsible for the wettest, most miserable summer in living memory.

Now I’m not saying that Robert Harris is a warlock. But in 2019 he published The Second Sleep, a book about the aftermath of civilisation’s collapse, in which he mentions that such a collapse may be brought about by, amongst other things, a drug resistant pandemic.

Can it be a coincidence that I write this from a pandemic lockdown?

Some people may be curious to know that the Second Sleep is about a young priest’s investigation in the far, post-event, future into the mysterious death of an older priest. Some may also be interested that it is perhaps Harris’ bleakest book since his story of Nazism triumphant, Fatherland. Like that book The Second Sleep is an elegantly written and gripping thriller in which the initial death proves to be but the loose thread that unravels the veil covering a much greater monstrosity. Some may be interested to know that the other ways in which Harris postulates that civilisation may collapse are nuclear war, climate change, an asteroid strike, a super-volcano eruption (I think he means Yellowstone), or generalised information technology failure.

But all that is beside the point. Robert Harris has cursed us. He is the Rhianna of the Covid-19 generation.

Summary: A prerequisite for Sinn Fein being permitted to join a coalition government in Dublin should simply be that they agree to the establishment of, and full cooperation with, a truth commission on the Troubles. 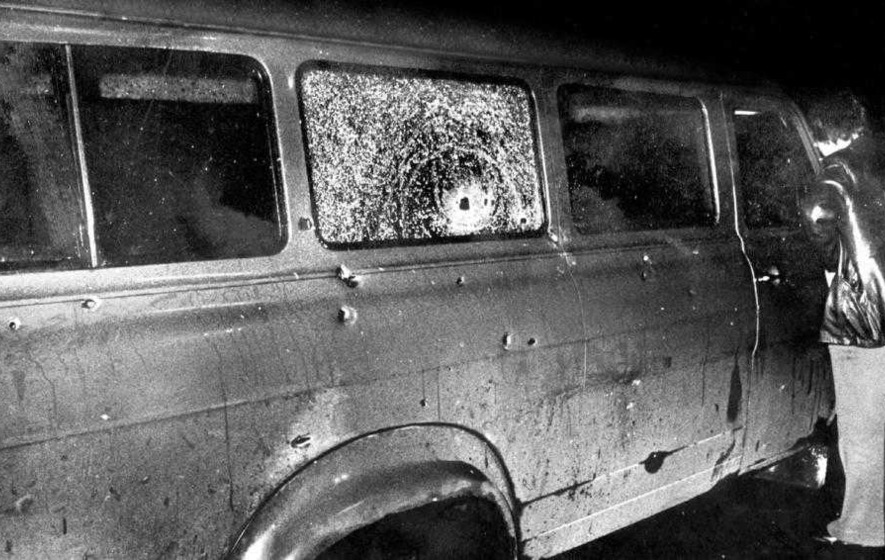 “The past is never dead. It’s not even past.” – William Faulkner

Writing 2,500 years ago about a civil war in Greece, Thucydides, the first great historian of that war between Athens and Sparta, made a vital observation: ‘The people make their recollections fit with their sufferings”.

Given the unchanging realities of war and human nature, what was true then is true now. Hence recollections of the Troubles reflect the sufferings of those recalling them. For example, Britons remember with justifiable grief and anger the civilians slaughtered in the Birmingham and Guildford bombings. But many still cherish the paratroopers who similarly slaughtered and injured so many unarmed civilians in Ballymurphy and Derry.

As with so many other things to do with their history, most Britons are blissfully unaware of their security forces subsequent collusion with Protestant, “Loyalist” paramilitaries who acted as proxies in the commission of later atrocities, such as the Miami Showband massacre.

Loyalist paramilitaries when they called their ceasefire did express “abject and true remorse” for the sufferings of the innocents that they had caused. But elements of their community still clearly cherish the memory of some of the worst perpetrators of that hurt, and still celebrate the pain caused.

Irish “Republicans” keep bright the memory of British and Loyalist atrocities but grow irritable at the mention of their own murderous attacks, particularly those on Irish civilians such as Kingsmill, Enniskillen, and La Mon. Their peevishness is perhaps at its greatest when reminded of the savagery of their post-ceasefire butchery of Robert McCartney and Paul Quinn.

Of course, war crimes such as these and brutality by those inured to war are as old as war itself. But when selective memory is practiced in relation to a civil war, then it impedes the possibility of reconciliation and reunification in its aftermath.

It is the very nature of a civil war that after the guns fall silent the belligerents have to continue living together with those they have so grievously injured. The Good Friday Agreement was an effort to establish a basis on which this could happen. With Brexit striking at the very foundations of this peace settlement new constitutional possibilities must be contemplated, including that of Irish reunification. But true Irish reunification depends on uniting people, not just political territories. Without honesty about not just what each side endured but also what they inflicted then such true reunification becomes impossible.

The ideal of Irish reunification has suffered some quite serious blows in recent weeks with the crass celebrations by some victorious Sinn Fein candidates in the recent Irish general election. Singing “Up the ‘RA” on such occasions demonstrates a spectacular insensitivity to a section of the Irish population who suffered at the hands of the IRA during the Troubles but who must now consent to reunification if a New Ireland is to become a reality.

Martin McGuinness, notably in a speech he gave at the peace centre in Warrington, did show considerable moral courage in confronting the pain caused by IRA operations. Implicitly in that speech he recognised that even a just war is an evil thing.

But, like those Brexiters whose only knowledge of the Second World War comes from watching The Dambusters, many of today’s Sinn Féin activists’ attitude to the Troubles is, appositely enough, troubling. They seem to regard their armed struggle not as a regrettable necessity,  but rather as a moral good and those involved in it as beyond reproach. This is a similarity they have with the British Conservative party who resent the idea that British armed forces should be held to basic human rights standards.

The post-election negotiations to form a new Irish government may yet see Sinn Féin entering government, possibly even holding the office of Taoiseach. Former armed rebels entering the government of an Irish state which they hitherto opposed is hardly an unprecedented departure in history. Fianna Fáil did it. Clann na Poblachta did it. The Workers’ Party did it. Sinn Fein has already done it in Belfast.

But with a senior role in government comes responsibility. And one of the principle responsibilities of Irish government over the next decade is going to be exploring the possibility of Irish reunification and, hopefully, establishing a process by which such unification can happen.

This will be an impossible task for Sinn Féin to lead so long as they continue to refuse to face up to the full truth of their history including its most unpalatable aspects and the unremitting pain that they have inflicted on so many hundreds of their compatriots.

Many of the other parties elected to the Dail have refused to contemplate entering government alongside Sinn Fein such is the distaste that they feel at their history. But the logic of the peace process demands that Sinn Fein should have the opportunity to participate in government should the electorate so deem it.

This is a circle that can only be squared if Sinn Fein faces the truth of its history and ceases revelling in silly songs and slogans. In other words, a prerequisite for Sinn Fein entering government in Dublin should be its agreement that the government establish, and Sinn Fein cooperate fully with, a truth commission, modelled on the South African precedent.

Facing the truth about oneself is always a difficult thing. But, if nothing else, over the past decades Sinn Fein leaders and supporters have demonstrated considerable courage. However, it still remains to be seen whether they have the fortitude to move beyond their current posturing self-righteousness to help establish a process to properly remember our collective past and establish an agreed account of it that acknowledges all our sufferings and not just those of any particular  partisan faction.

After all, a new and reunited Ireland needs a foundation of shared truths.